As a pile of white custom emblem tags with a picture of a bamboo stick on it gradually spread across his kitchen table, Deejai Henderson, fashion designer and founder of Good Karma Ko., described to me what one of his childhood friends said to him just two days before he was gunned down during an armed robbery. “He called me and was like, I know your brother is probably going to be in prison for the rest of our lives, but you still got a brother in me”.

After the tragic loss of his friend and seeing his older brother go to prison in 2009, Henderson had front row transparency of where the street gang culture would lead if he also continued down the same path. “Doing the stuff that me and my brother and our group of friends were doing was low vibrational stuff,” said Henderson. “It's stuff that I'm really not proud that I was doing, but it took for me to do that to realize that it wasn't good karma.” he elaborated.

Making the conscious decision to change the way you're living for the better usually comes from being equipped with an uncomfortable amount of emotional intelligence. Fortunately for Henderson, things are coming full circle for the better, and it's only the beginning.

On November 15, 2019, Henderson will officially launch ACT 1 to his clothing line, Good Karma Ko. ACT 1 will consist of Good Karma key chains, Sand and Military Green t-shirts, Sand and Blue Spruces hoodies, and socks. As spectators, we’ve had glimpses of the cohesion, organization, and traceable messaging in the Good Karma apparel that Henderson occasionally teased on his social media accounts over the past year. Before arriving to his current state of forward thinking and strategic personable marketing, Henderson embarked on a spiritual journey that he was only prepared for due to his emotional intelligence, and the prioritization of people who depended on him. 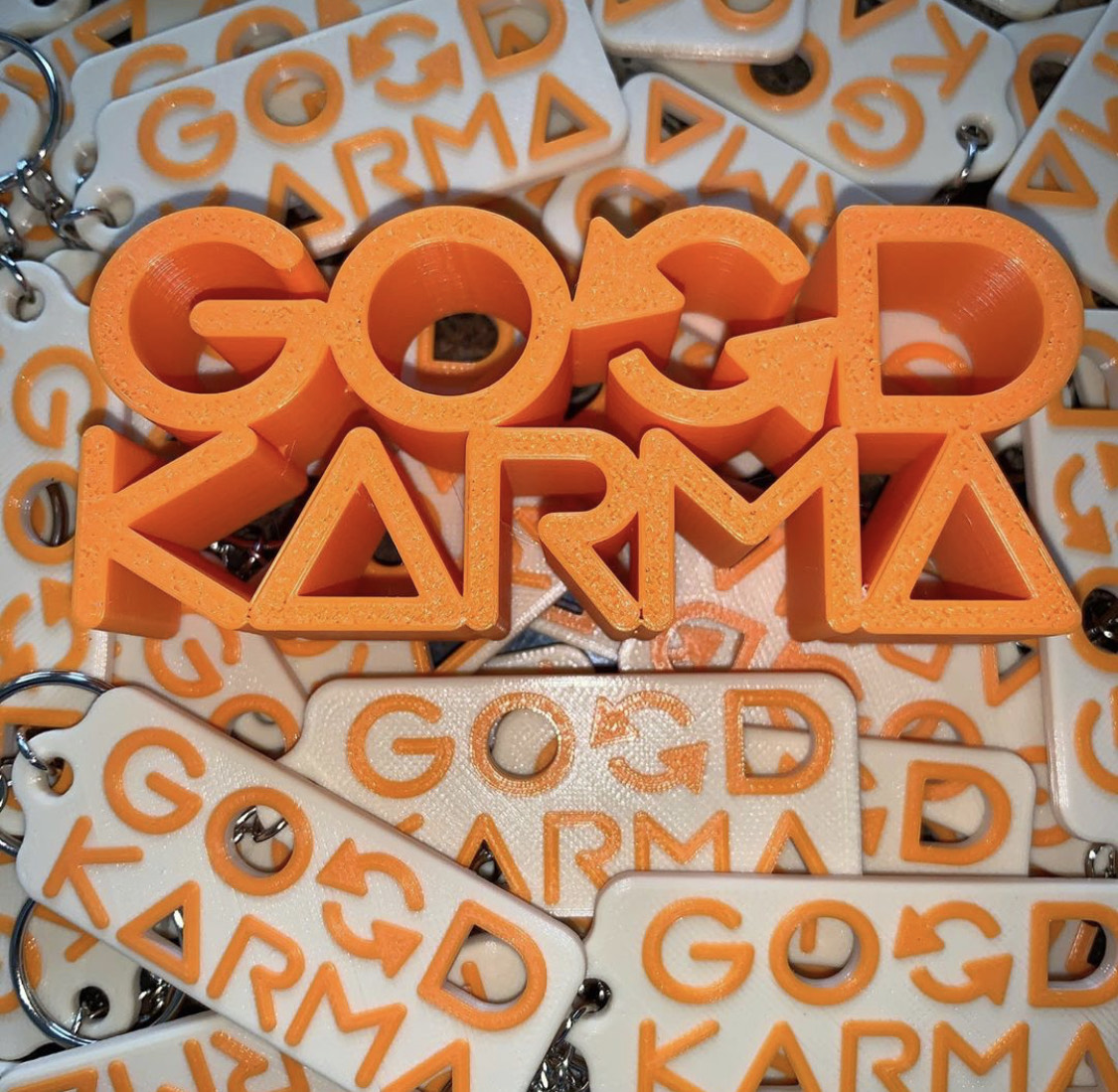 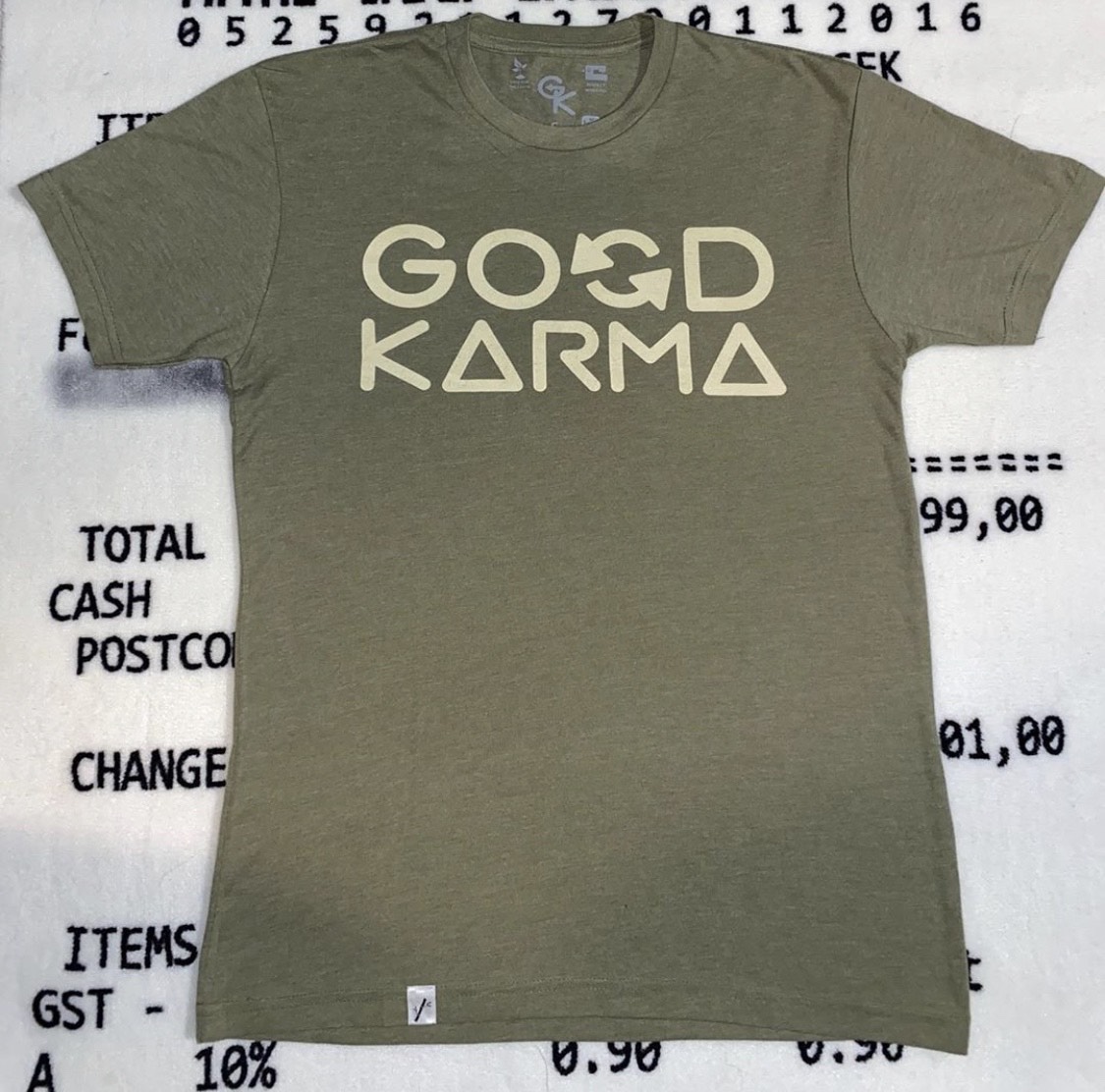 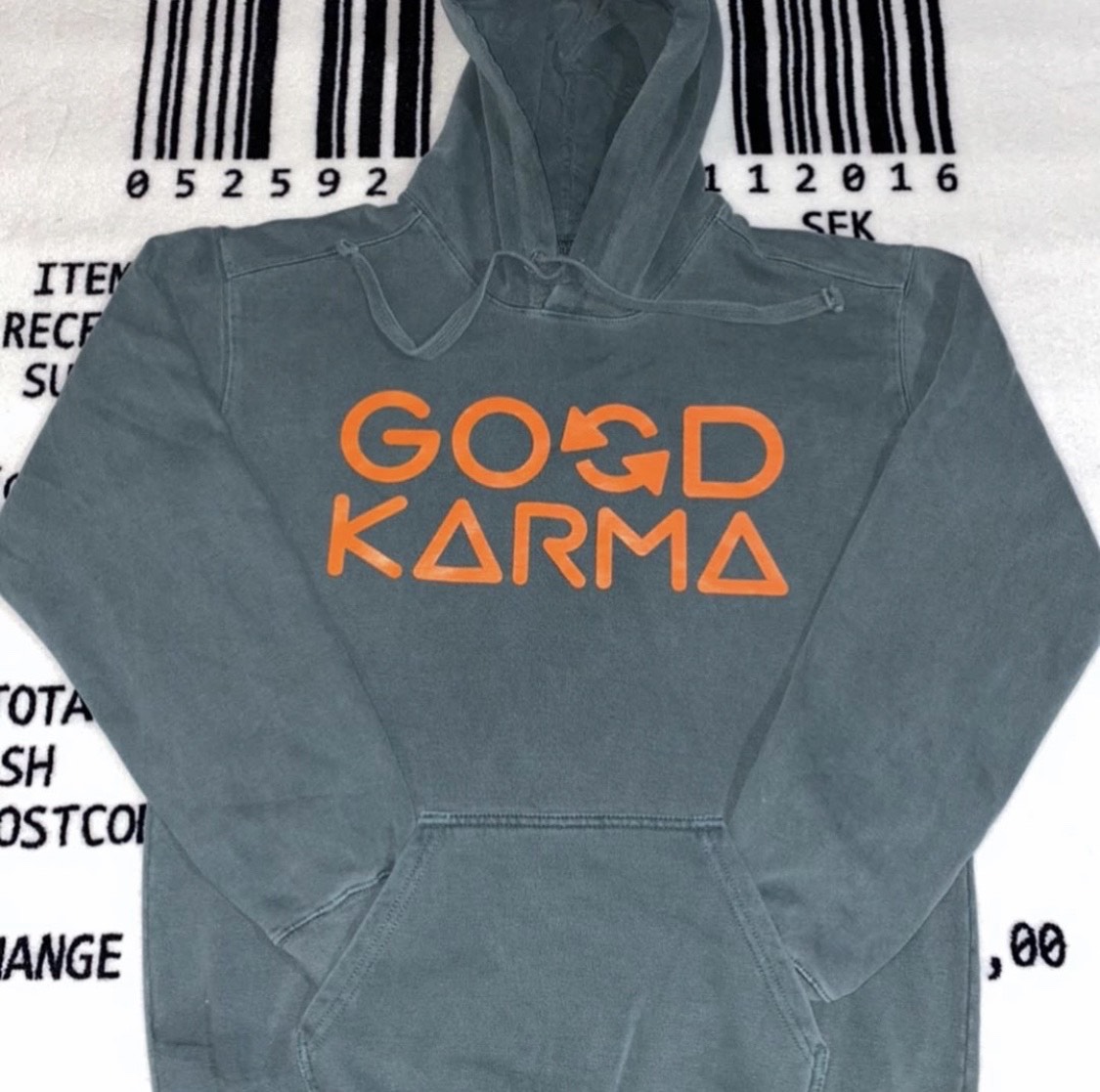 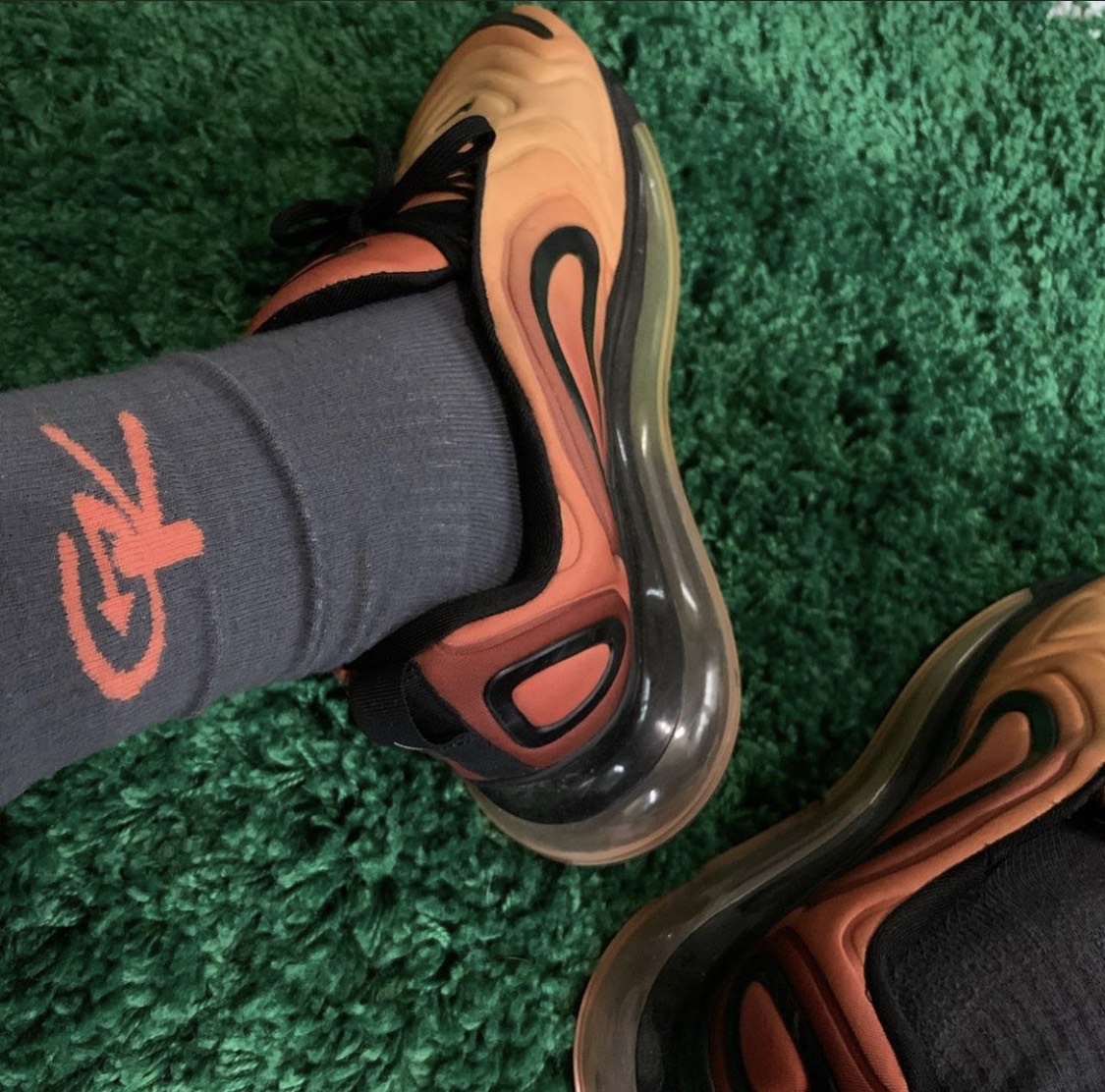 In February of 2016, Henderson moved from his native of Charlotte, North Carolina, to Seattle, Washington. “It was a financial move, but more so a spiritual move because I wanted to prove to myself that I am who my mom has been telling me I was gonna be my whole life,” he explained to me. Moving to the west coast was Henderson’s way of solidifying his independence, as he always knew that it would be up to him to change the trajectory of his family's lives. Underneath the risk and the search from social freedom, there was also a relentless pursuit of creative control.

Henderson took the ultimate leap of faith by moving to Seattle, with only a verbal promise of a potential job, and some money saved up. “I waited six months for a job and depleted all $6,000 I had saved during those six months,” he said, while laughing cynically. After those six months passed, another one of Henderson’s affirmations became a reality, as he began working at a cannabis production and processing plant in Tacoma, Washington. “I used to joke about that weed thing,” he said. “I used to tell my friends that one day I’m going to get paid to roll joints, and that shit really happened,” he elaborated.

Henderson worked his way up with multiple promotions and eventually moved on to a larger marijuana extraction company while in Washington. In the southern regions of America, the marijuana business is still viewed as a black market or a subculture. However, in the western regions of the country, it is very much treated as a corporate industry. Which also means there is also nepotism, politics, and discrimination in the marijuana industry. Henderson saw this firsthand as he continued to exceed performance expectations in the workplace. “Like in any corporate job, people of color are usually at the bottom of the barrel, and there is little room for top level advancement,” he said. Although tapping into the cannabis industry was a milestone that he sought out, Henderson quickly realized that that he was chasing financial freedom for the wrong reason.

During the occasional trip back home to Charlotte to visit family and friends, Henderson had a point of reference to the type of environment and hospitality he preferred to be around as it pertained to the cultural differences between Seattle and Charlotte. “After three years, I realized what Seattle was like. And to me it’s a place you visit, it's not a place where southern people probably want to live because of their state of mind,” said Henderson. “Nothing against them. I love their carefreeness, but I was raised with certain principles and hospitality that gets looked over out there,” he explained.

During those visits back home, Henderson also noticed the early stages of the current renaissance taking place in Charlotte’s arts and creative scene. “After coming home a bunch, I started seeing more creatives and I like stuff like that. I'm encouraged and inspired by that,” said Henderson. He added, “So, when I saw it getting back to that, I was like, man I wanna go home and screen print”.

Since returning to Charlotte, Henderson has fully immersed himself into perfecting Good Karma, while doing his due diligence regarding fashion street wear. His current focus and attention to detail stems from another example of his emotional intelligence, with his first attempt to launch a clothing line in early 2015. Due to creative differences with his then partner, the clothing line never reached its full potential, and Henderson focused on building a lifestyle brand on his own. Like in most of his life experiences, Henderson bottled up the good out of a bad situation and embraced the things that could help him in his evolution. “After selling stuff out of my trunk the first time, I still have an insight on guerrilla marketing. I'm not opposed to pulling up on somebody to sell a shirt.” he told me.

I asked Henderson where his fascination for fashion came from, and he quickly said his older brother. “He was always fly to me. I would never fucking tell him that though, “he said, jokingly. From a street wear and branding perspective though, Henderson was heavily influenced by two iconic Japanese street wear designers in Nigo, the creator of A Bathing Ape (BAPE), as well as musician, and founder of Fragment Design, Hiroshi Fujiwara. In his relentless pursuit to be the change in his family’s lineage, Henderson knew if he wanted to create one of the greatest street wear companies, he had to further explore the culture by traveling to the home of its godfathers. In 2019, he took two trips to Tokyo, Japan to observe and study the landscape of one of the most fashionable places in the world. Henderson explained to me, “I can't be into street wear and try to revitalize my own style without going to the mecca”.

Henderson's dedication to arming himself with the adequate knowledge before releasing a product to the world is one of the many clear distinctions between what to expect from Good Karma Ko. and other clothing companies. There is also a clear connection between the brand and the mission of the man behind it. “Long story short, the youth are the future. I'm doing this because I want to inspire young people to do what's honorable,” he said.

Good Karma is the change that Henderson always wanted to see in himself, and one that his mother always knew was there. Good Karma is a lifestyle brand that embodies everything Henderson has endured, as well as the example he's trying to be for the next generation of black entrepreneurs. There’s a purposefulness with the branding in which Henderson wants to teach people about Karma that he’s all too familiar with the bad side of. “One of the things of Karma is to pay it forward, because if you don’t pay it forward, you're gonna be stagnant,” he said.

Building a brand can be viewed as an attempt to curate a perception, to then motivate groups of people to buy into the vision or idea. The fallacy in that logic could be that most consumers usually already have specific attachment’s to brands that essentially earn their loyalty. It could be as fundamental as the visual memory of the silhouette on a specific sneaker, or as intricate as the historical context of the time, location, and mental space of when you first bought a winter coat with your own money. As important as branding is in most industries, authenticity will always reign supreme in attracting an audience. With a lifestyle brand such as Good Karma, Deejai Henderson doesn't need to resort to the conventional tactics of trying to convince people to believe in his brand, because it's easy to buy into relatable authenticity, where you can see the creators journey etched into every stitching of the clothing.

The Good Karma Ko. website (www.GoodKarmaKo.com) will officially launch at 6:30PM ET/3:30PM PT on November 15, 2019. Make sure you follow Good Karma on Instagram (@GoodKarmaKo) to stay up to date on the latest news, releases, and pop up events.

Jon Olangi is a senior editor and writer at TTT Media, where he covers culture.

Quarantined Q&A: Sounds Of The Westside With Charlotte Producer ED$