Energy is often the revealing factor that sways us to make judgements or interpretations of others. Particularly in a society where people can easily fabricate their lives on their social media, or the shoes on their feet and the jewelry on their person don’t match their account balance, one thing is certain; energy never lies.

At an Unwine CLT event back in August 2019, inside of Charlotte’s premier creative space for interaction and innovation, beSocial, you could see Ohavia Phillips from the other side of the room, next to a spread of antique magazines on a wooden counter, fixing her hair and dancing by herself while recording promo videos on her cellphone. As I walked over to introduce myself to Phillips, she greeted me with an unwavering smile, and a handshake that was as sturdy as her Milly Rock. The passion in which she spoke about hosting and entrepreneurship was persuasive enough to make a person run through a wall for her. Upon meeting Phillps, it was clear the energy of the person standing in from of me matched that of the random, yet captivating Instagram live videos, and behind the scene clips of her Milly Rockin’ between hosting gigs.

Phillips, the oldest of five, was born in Brooklyn, New York to a Costa Rican mother, Mahalia Hanson, and an African American father. Even at an early age, the intrigue of media was present for Phillips as she would roll up loose paper and pretend it were a microphone. “I used to play reporter with my sister Kia at 9 years old. I was always the one talking and interviewing her,” she said. “At all the family functions, I used to always be the one to get up in front of everybody and do the talking.”

As an introspective and outspoken child with her dreams ahead of her ready to be materialized, Phillips was rocked with news that would eventually be a turning point in her life, yet at that moment, was the lowest point in her life. The betrayal of Phillips' Father towards Hanson, along with their many quarrels during Phillips' childhood led to financial hardships and a frightening time for a single mother and her five children. “One day I came home from school and my mom said we are going to a shelter,” she said. In the three to four months they spent in shelters, Phillips never lost sight of her aspirations to be the difference maker for her family, and most importantly her mother.

In 2009 Phillips moved to Charlotte, North Carolina where she would eventually receive a bachelor's degree in Communications with a minor in Journalism, at the University of North Carolina at Charlotte (UNCC). After college, Phillips moved back to Brooklyn for about six months, where she spent most of that time helping at risk youth in her community how to read and write. While in Brooklyn, Phillips received a call for an interview with Spectrum News back in Charlotte, where she previously interned during her collegiate years. Phillips described this as her ‘mama I made it’ moment.

Taking a producer/reporter position with Spectrum was a no-brainer for Phillips and nothing would stand in the way of that. “For the second interview, I took a $50 bus from Brooklyn to Charlotte because I couldn’t afford another flight,” she explained to me, laughing hysterically. Phillips saw it as an opportunity to pay forward everything her mother endured over the years to maintain a suitable lifestyle for her and her siblings.

After being a sponge and mastering the tricks and trades of a newsroom, On October 10, 2018, Phillips’ pursuit for full ownership of her career and entrepreneurship eventually lead her to send a life altering text message to her executive producer that read: “Thank you for all you taught me, but it's time to go.”

“I left because I couldn’t do things my way,” she said. “I would want to cover a story that was community focused, and they would ask why.”

Phillips left Spectrum with a wealth of knowledge and sharpened skills, along with a lifelong bond with her then colleague, Christina Watkins, whom she refers to as her “Honorary big sis.” Over the span of a year since leaving the Spectrum and the 9-5 grind behind, Phillips has catapulted into the must-have host to any event, in any field, among any age group in Charlotte. From hosting panel discussion about unpopular relationship topics, to speaking at teen jams at the local YMCA, hosting cultural festivals and award shows, or emceeing sporting events at her Alma mater, Phillips’ comfortability with holding a microphone and dictating an entire crowd is worth marveling at once you’ve experienced it in person.

Hosting community events are often the most gratifying for Phillips as she prioritizes the importance of sewing back all the lesson’s she’s gained during her trying childhood. “I’m big on community because I come from a broken one. I feel like it's my duty,” she said. You’ll seldom see Phillips post about the philanthropic and community-based hosting's because she’s not interested in the acclaim that some seek from being involved with community-based events. “Unless the company posts something about the event, you won't see me post it first,” she said. “I don’t get paid for those. I only care about making sure the resources get to where they need to go.”

The abundance of love that Phillips often expresses onto others, along with her free-spirited elegance and hustler mentality, all fittingly track back to three of her biggest media influences in Oprah Winfrey, Hip Hop artist MC Lyte, as well as former host of BET’s 106 & Park, Marie Antoinette Wright, better known as Free. “MC Lyte made a chick like me feel relevant. You know, she’s also from Brooklyn, with a raspy and killer voice,” she said. “MC Lyte had a powerful voice where you know its MC Lyte when you hear it. I studied her,” she added. “Every other morning I watched vintage 106 episodes to study Free,” Phillips said of Wright. “Free also set the example of natural beauty for me. She had the look of a natural bad ass female host.”

From Oprah’s hustlers mentality and dominance in media, to MC Lyte’s distinct and powerful voice, and Free’s confidence to exemplify elegance through her natural beauty in a male dominated industry, Phillips picked up the necessary characteristics from legendary women, and has since created her own style, distinct voice and identity early in her career. Phillips is exceptionally brilliant in the execution of her spirited and timely humor, the camera gravitates towards the glee that exists in her soul, and her intellect blended with the joy in the work she does makes it hard to not marvel at how she makes it all look so easy.

Phillips will be the first to remind you that making it look easy stems from what’s done behind the scenes. “They see the fabulousness, but they don’t see the meticulous work being done,” she told me. More significantly, Phillips tries to instill a foundation of hard work to her younger siblings in leading by example. Phillips is the first in her family to own a business and will be the first to earn a Doctorate degree.

As the hosting opportunities continue to flow in, Phillips understands that her business, The Oh Show LLC, is what will elevate her even further into the next chapter of her career. On Saturday, October 26, 2019, Phillips will host the second live taping of her flagship show, The Oh Show Live, at the Harvest Center in Charlotte, NC. “I got into this game to create something, so to see tickets to my shows sell out is very humbling,” said Phillips. She describes The Oh Show as a feel-good media platform to discuss what keeps us going. “I want to inspire my community and environment,” she told me. “Enough people already do gossip, and I don’t knock it, but I chose the road less traveled.” 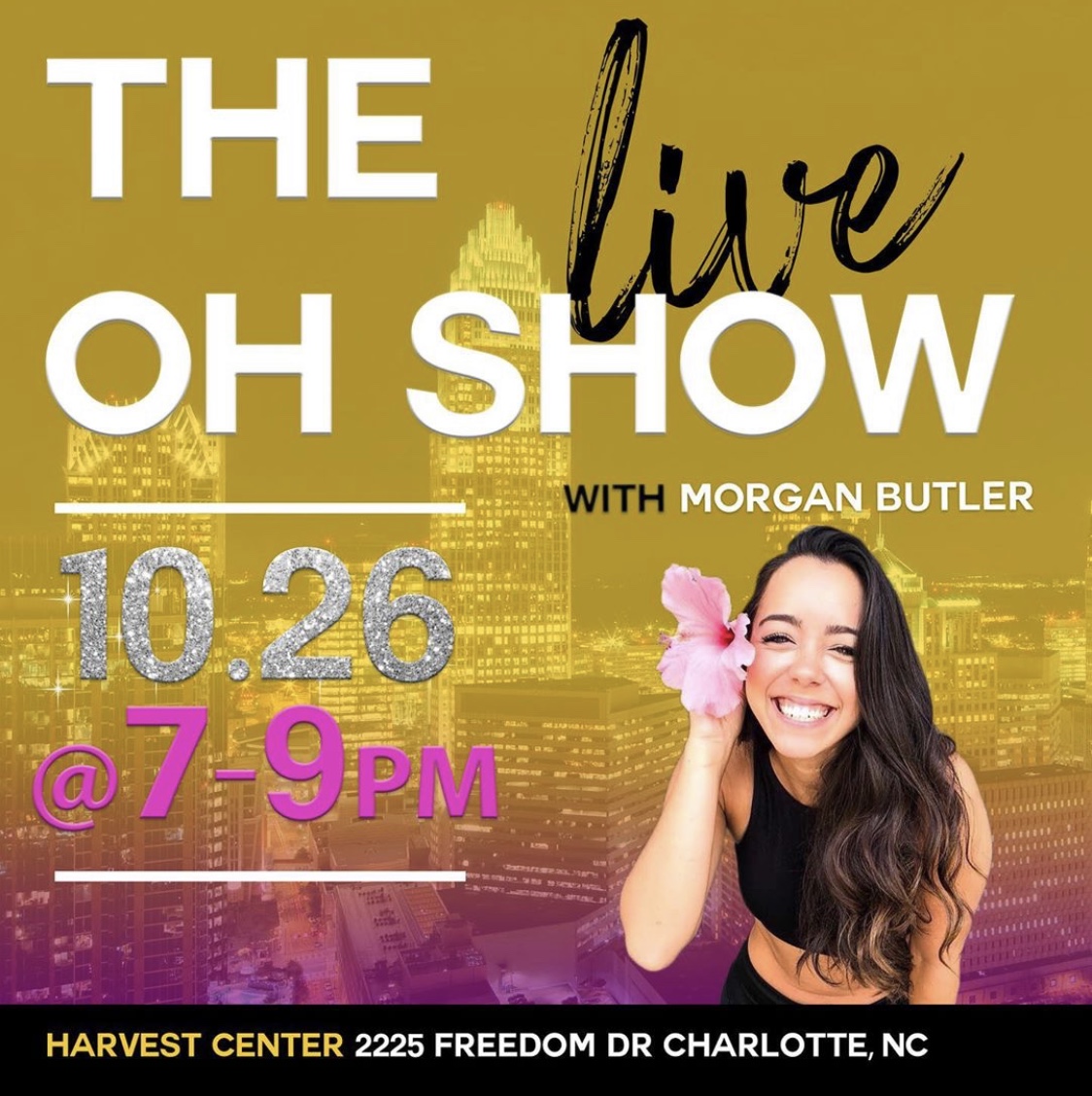 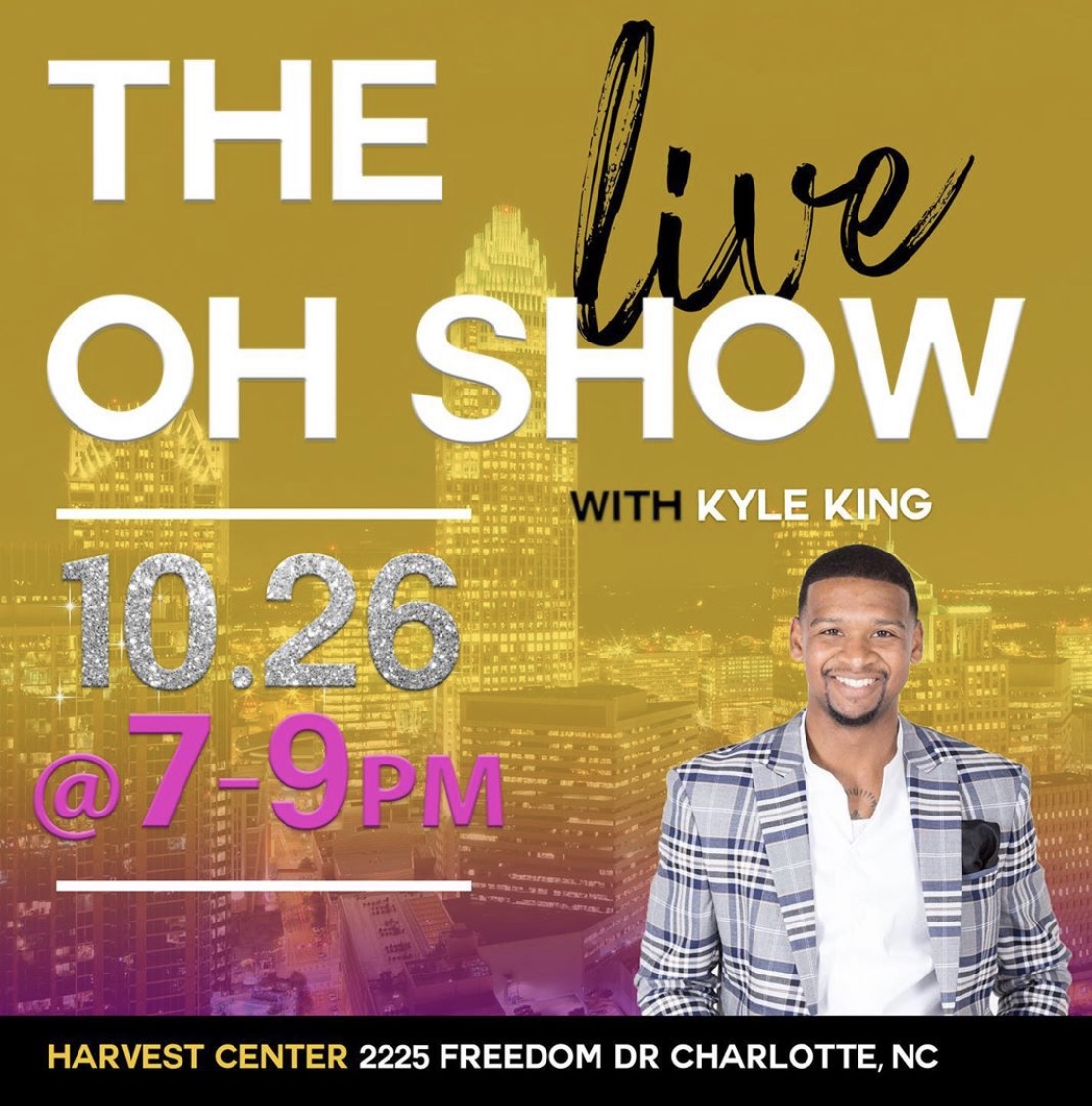 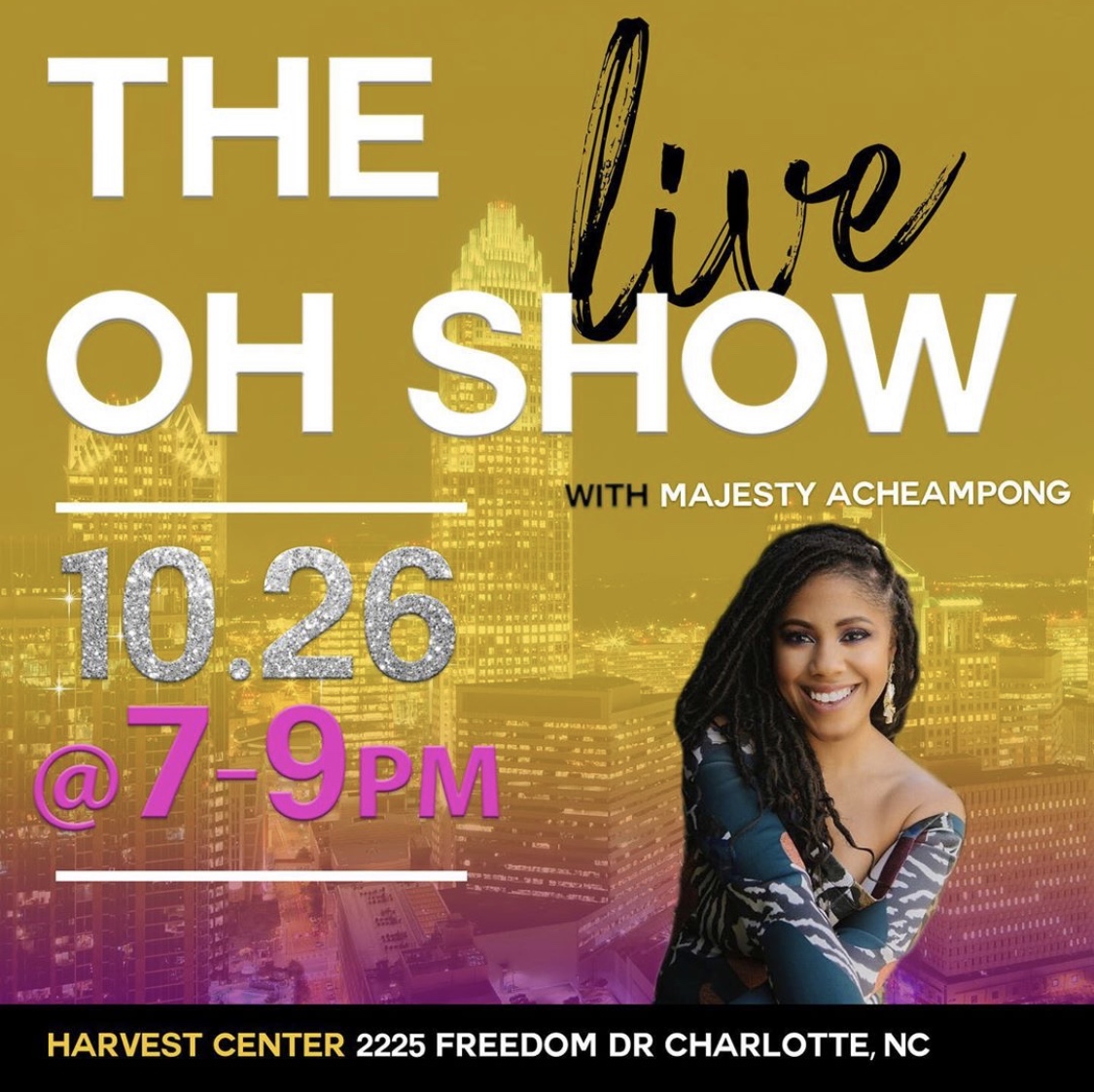 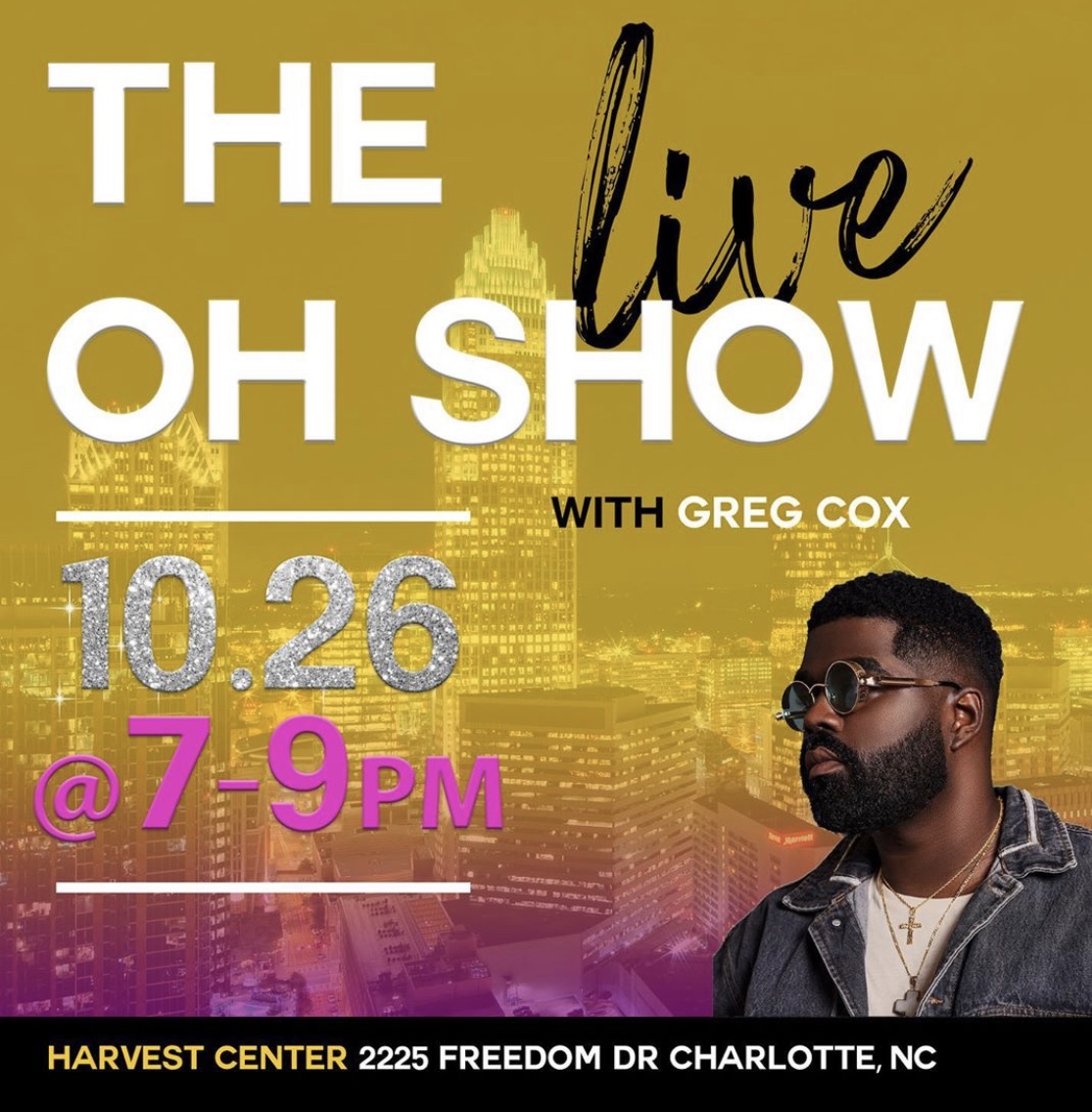 Ironically, the theme of the second Oh Show live will be focused on shifting influence, with a panel consisting of Charlotte R&B singer/songwriter, Greg Cox, Charlotte influencer and founder of Ignite Your Influence, Majesty Acheampong, author and founder of The Shine Institute, Kyle King, and health-fitness entrepreneur, Morgan Butler. Phillips' devotion to community, family, and more intimate matters sets her apart from what is to be expected from media personalities and talk show hosts currently in the industry. Phillips’ end goal with her company is deep rooted in her spirituality and faith. “All the hosting's and everything happening for me right now is a result of the times I was selfless and giving to others,” said Phillips. “Everything you give you get back. Its Jesus, that’s the explanation.”

As she maneuvers through an industry that can scathingly bring plenty negativity and obstacles, her upbringing has well equipped her to withstand whatever challenges that may come her way. “This is my driveway, I'm not going anywhere,” she said adamantly. “I don’t overstep my boundaries. I take things in stride and be a G’ about it. I never stop being O'.”

Phillips is star. She's unequivocally an expert at what she does. Her energy is undeniably fulfilling, and she's currently in a peacefully creative state, doing what she loves the most daily. More germane to her career, Phillips’ motivation for success isn't exclusive to monetary gain or the fame that derives from it. Very Tyler Perry-esque, she strives to buy back neighborhood blocks and buildings in Brooklyn to build a much more affluent community than what she grew up in. If you haven't already heard of Ohavia Phillips, or seen her in person or on your social media timeline, rest assured that she is playing the long game, and will make her way to your range of view soon enough.

Jon Olangi is a senior editor and writer at TTT Media, where he covers culture.

Quarantined Q&A: Sounds Of The Westside With Charlotte Producer ED$